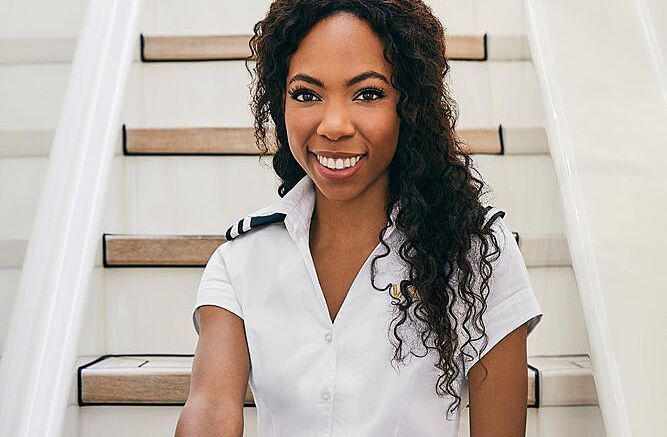 RHOBH: Lisa Vanderpump being sued for allegedly violating labor laws, not paying wages by Amanda Cline
Vanderpump Rules: The rise of the new generation of SURvers…and Scheana by Amanda Cline

As Alexis Bellino joins the boat to make out with her boyfriend throughout the trip, where will the rest of the Below Deck boat relationships land?

Alexis Bellino, the former Real Housewives of Orange County star, is celebrating her divorce on Below Deck this week with our favorite stews and crew…members.  At the end of the last episode, Ashton Pienaar threw Rhylee Gerber under the bus and asked Captain Lee if they could work without her for the next charter.  Aka he asked to fire Rhylee with six days left in the season.  Captain Lee, the ever compassionate boss, sided with Rhylee much to the dismay of Ashton.

Ashton told Rhylee he was just “tolerating her,” and Captain Lee said that wasn’t the proper way for a manager to deal with a crew member.  Ashton also said that Rhylee was at the bottom of the ranks and that she should just “be quiet and take orders.”

As I said, I talked and listened to everyone and made my own decision. You are welcome to be sure. The obvious term here is to listen and actually hear. The boys all sang the same song, and it wasn't an objective viewpoint. I was comfortable with my call. Thanks again. https://t.co/bi4HJLL1XS

Meanwhile, Captain Lee obviously thinks shes a worthy asset enough to not complete the last charter without her.  While speaking with Ashton, Lee used many of the same talking points that Kate did.  I’m sure if Ashton knew that fun fact, he wouldn’t love it.   But the fact remains that Kate is a better leader than Ashton could ever hope to be.

Last week, Kate and Captain Lee were on a podcast and both agreed they would not work with Ashton again.  I can’t help but think that if Ashton focused on working hard instead of focusing on how to break Rhylee down, he would be in a better position at the end of the season.  He was promoted to bosun and had a great opportunity ahead of him, but he spent his energy harassing Rhylee instead of helping his team perform.

Related Story: Below Deck: Captain Lee and Kate Chastain would not work with Ashton Pienaar again

A part of being bosun is being able to manage your team, as it is a management position.  It seems that if Ashton cannot properly manage his team and delegate work, he should not be in a position of power.  I wonder what his next moves will be after he leaves the yacht.  Maybe he can try deckhand again?

Below Deck is on Bravo every Monday at 9 PM ET.